What a week ! What a week! If I had to summarize it all in one line it would be: "the good, the bad and the ugly".

First the good. After months and months of uncertainty and 8 weeks of delays, my departmental transfer has finally been approved and I will be starting in my new position on the 31st! I'm ecstatic. Going to a different department means adjustments but also means new challenges and occasions to learn. I've very much been looking forward to that. 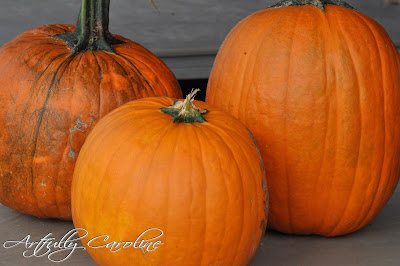 Also in the good, the hubby and I went in a long overdue date at a local cajun restaurant and had a delicious and spicy meal, followed by a decadent dessert: Godiva chocolate cheesecake. Not as good as poor Manny's (you have to be from the Utica, NY to know about Manny's) but yum!

Yesterday we took bug to Larriland farm to find pumpkins. Bug had fun running around looking for the perfect little pumpkin. We will be carving those on Saturday because the weather has not been very favorable and we were worried that the pumpkins might rot very quickly.

Then the bad. Both the hubs and I caught a cold and we had a few lousy nights fighting fever and cough. Not much crafting got done. I was way too tired. And then our washing machine decided to quit on us and cough up a bunch of water in the basement. No damage done thankfully but we had to spend part of the weekend looking for a new washer which will be delivered next weekend. We got somewhat lucky though: the model we were after was on sale!

And the ugly. Well the ugly is that Bug is now sick too. Sick enough I had to call my boss and request to work from home. Lots of unpleasant washing and cleaning for mom and dad. Enough said.
Posted by Caroline @ Artfully Caroline at 8:45 PM

I would love hearing from you. I read all comments and time permitting will respond to all.